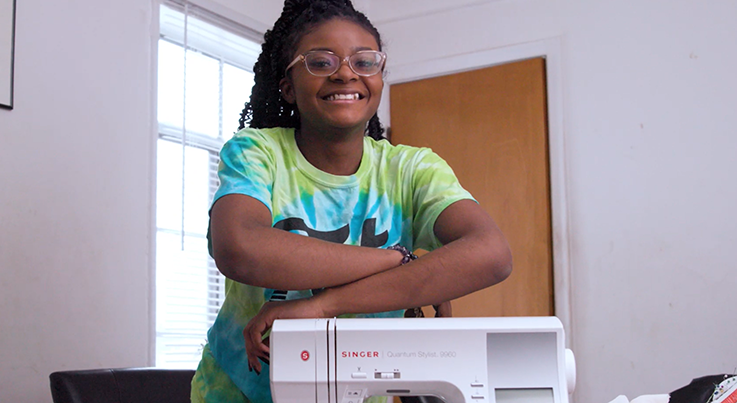 But as part of February’s Black History Month celebration to honor civil right icon Rosa Park, the Pistons and Singer Corporation partnered to surprise the aspiring fashion designer with a new sewing machine.

“She thought that she had just gotten Piston tickets, and we were just going to the game,” Sheree’s mother, Sherese, told Pistons.com recently. “I think we told her she won something, but it had to make sense so she would go and wouldn’t be none the wiser.”

The donation was part of the Pistons’ collaboration with the Rosa Parks estate to honor the woman credited with igniting the Civil Rights Movement in 1955 when she declined to give up her bus seat to a white man in Montgomery, Ala.

“Mrs. Parks’ heroism and activism helped initiate a civil rights movement that changed U.S. history and continues to this day,” Pistons Chief Business Officer Mike Zavodsky said when the collaboration was announced. “As we celebrate her life and place in our nation’s history, recent events demonstrate that significant work remains to advance equality and social justice for all.  Our organization will continue finding ways to enhance economic opportunity, enrich youth education and support voting rights.”

Parks, who later moved to Detroit in 1957, rose to international acclaim for her role in the Civil Rights Movement, worked as a seamstress at a department store so it was a natural call to team with Singer Corporation for a sewing machine giveaway.

“Rosa Parks’ impact can be measured by how much she gave to others, and her legacy continues to serve as an inspiration for the Detroit Pistons organization,” Pistons VP of Brand & Marketing Strategy Tyrel Kirkham said. “We were excited when the opportunity to gift Sheree with a brand new Singer sewing machine to help her pursue her dreams presented itself.”

Sheree has dreamed of being a fashion designer since she noticed the occupation while watching cartoons.

“I remember the character going through the process of making clothes so it was really interesting to me,” Sheree said. “I started researching different designers and stuff, and I got really interested in it and I knew I wanted to do it.”

She had a previous sewing machine which helped her upcycle clothes – she would turn old jackets into  vests – but the needle broke. Kirkham heard about Sheree through his board seat at Give Merit, a local youth development nonprofit. Sheree has participated in an entrepreneurial program sponsored by Give Merit since she was a freshman.

SVP Worldwide, which houses the Singer brand, was acquired by Platinum Equity in 2021. Platinum Equity is the private equity firm founded by Pistons owner Tom Gores so there was a natural synergy. The Pistons reached out to Singer where executives are well aware of Parks’ work as a seamstress, noting the dress she was creating before her protest is currently at the Smithsonian.

“Inspired by the craft of sewing, Rosa Parks achieved incredible cultural milestones while even designing her own dresses like the one found in the Smithsonian,” SVP Worldwide Chief Marketing Officer Dean Brindle said.  “SVP Worldwide is proud to provide an opportunity for a talented fashion student to expand their love of sewing with new Singer products.”

Sheree admits she had no idea what was in store when she arrived at Little Caesars Arena. But she does have an idea on how to give back. She dreams of becoming a success and there is no way she will forget where she comes from.

“I hope to create a non-profit program for underprivileged black youth in Detroit for those who want to become a fashion designer or are thinking about modeling,” Sheree said. “They can learn marketing, marketing a fashion show, making a fashion show, modeling in one, just so they can get that hands-on experience.”