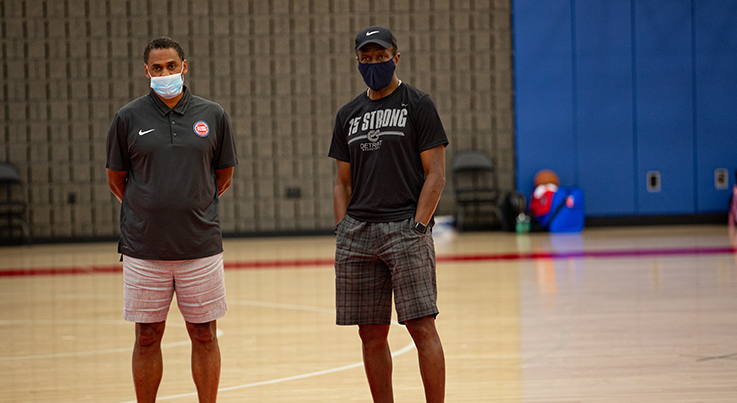 It is an annual occurrence in NBA markets.

Shortly after the draft, a news conference is held to introduce the young prospects to local media.

The front office’s top talent evaluator and the head coach explain the reasoning behind the selections and why this collection of talent will ultimately lead to winning games.

That was the scene on Nov. 27 when the Detroit Pistons presented their 2020 draft class – rookies Killian Hayes, Isaiah Washington, Saddiq Bey and Saben Lee.

Head coach Dwane Casey said all four players, “will be special for our program going forward.”

It was who delivered the words that was unusual: Two Black executives sitting atop the front office organizational ladder.

When looking at credentials, it is easy to see why the two men were hired by the Pistons. Weaver is considered one of the top talent evaluators in the league. Casey is a former Coach of the Year who developed the young core that ultimately carried the Toronto Raptors to the 2019 NBA title.

But when surveying the NBA landscape, their pairing is not typical as the Pistons are one of just four franchises in the league with Black men in the two top roles. There are 30 NBA teams with a workforce of players that was more than 80 percent Black for the 2019-20 season.

It did not occur by happenstance: Pistons owner Tom Gores and the rest of the ownership team have prioritized diversity and inclusion as key tenets in the organization. Their objective is twofold: Find the most talented and capable people for the job, and do so by searching in the most diverse possible pool of candidates.

“As a team, we always want to cultivate diversity. We understand the importance of it,”  Gores said at Weaver’s introduction in the summer. “But as much as it’s a priority, Troy and Dwane are the best men period in the world for these jobs.”

When the season begins on Dec. 23 against the Minnesota Timberwolves, nine months will have passed since the Pistons competed in a game that counted. The Pistons were the among the bottom eight teams who did not qualify for the Orlando “bubble” when the season resumed over the summer.

There are many new Pistons faces. Only four players remain from the team that finished 20-46 and near the bottom of Eastern Conference standings. The roster reconstruction is a testament to the vision of Weaver, who is seeking to bring skilled and tough-minded players to the franchise that has reached the postseason only twice in the last decade.

The potential reconstruction was top of mind when the ownership group initiated a discussion in May with Pistons vice chairman Arn Tellem, special adviser Ed Stefanski and Casey regarding expansion and reorganization of the front office team.

Gores, the founder and CEO of Platinum Equity, pushed back on an initial list of potential candidates, which was weighted toward assistants with the potential to grow into the top job. He asked for a new list identifying candidates ready to assume a top leadership position, and he underscored the importance of a diverse pool of candidates.

“We’re always going to look for the best possible person,” Pistons alternate governor and Platinum Equity partner Mark Barnhill said. “But we also want to make sure that we include minority candidates who can rise to the top of that discussion, rather than limiting the search to a pool of usual candidates that may lack diversity.”

The process led to three finalists, led by Weaver – who was eventually hired. The Pistons did not reveal the other candidates on the list, but reportedly the top three candidates were African American.

“I think that was one of the most important elements of the discussion in the spring,” Barnhill said. “All of us – Tom, me, Arn, Ed, Dwane – agreed that we’re not going to make diversity a secondary component, but rather a primary component as we grow and expand and advance our executive team.”

Weaver’s credentials are well known, and it was widely considered a matter of time before he landed a GM job. During his tenure with the Thunder, the franchise drafted standouts such as Russell Westbrook, James Harden, Reggie Jackson, Steven Adams and others. That talent has been foundational in building a consistent winner.

“I witnessed firsthand how hard he works at it,” Tellem said.  “His research into each player, how much he delves into not only their basketball ability, but their mental makeup, their work ethic, their commitment.

“In that regard, Troy has always separated himself from everyone else.”

Casey’s credentials are also established. Although he was fired by the Raptors after their playoff exit in 2018, peers named him Coach of the Year for the 2017-2018 campaign. He has a great reputation for player development and is considered one of the top coaches in the league. He led the Pistons to the playoffs in his first season, but injuries wreaked havoc on his second season.

Off the court, Casey has emerged as a community leader in Detroit. As social justice issues jumped to the fore of the league’s – and the nation’s – consciousness this summer, he joined players in peaceful marches in downtown Detroit and received an award from the Detroit nonprofit Focus: Hope for his relief efforts during the COVID-19 pandemic.

Casey is one of nine head coaches of color currently in the 30-team NBA.

Getting the best people

He also hired Michael Lindo as director of player and family engagement and Harold Ellis as a pro personnel evaluator. Both are Black men. Jhonika Hawkins, a Black woman, was promoted to director of executive operations.

Brown, Lindo and Hawkins were the primary organizers of the Pistons’ recent minicamp where a bubble was implemented to follow COVID-19 protocols to keep players and coaches safe during the pandemic.

All three are young and there is hope they will rise further in NBA circles.

Brown, who left an athletic administration role with Eastern Michigan, is grateful.

“I have to thank Tom, Arn and Troy for having the vision to give this black female a chance to be in this executive role,” Brown said.

That was the plan.

“Every executive we’ve hired is highly qualified, highly capable and performing at the top of their field,” Barnhill said. “In many cases, they were just waiting for the chance to step up to the next level.

“That chance germinates at the point you start looking for candidates, not the point you’re choosing from a list of finalists,” Barnhill said. “So you need to make diversity a primary component at the beginning of the process, not the end. That’s what we’re trying to do here.”