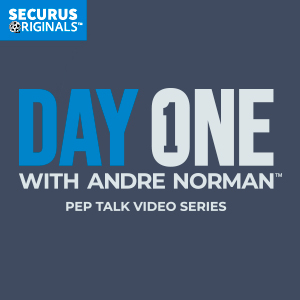 DALLAS, TX – Securus Technologies, an Aventiv company driving efforts to better serve the incarcerated through rehabilitative justice, today announced the availability of a new 12-episode podcast series on Securus Originals, titled “Day One with Andre Norman.” Created and hosted by Andre Norman, who turned his life around from prison gang leader to international speaker and Harvard fellow, Norman’s guests illustrate how the first days, weeks, and months of incarceration can be instrumental to a successful reentry. Each episode shares stories of formerly incarcerated individuals and how they made the best of their time behind the walls to create a real opportunity for a changed life following incarceration. The podcast series is available for free to incarcerated individuals who have access to the Securus tablets and free to the public on the Securus YouTube channel, Spotify, Amazon Music, and the Apple podcast store.

“Day One with Andre Norman” stands out not only because it was created by a formerly incarcerated individual, but also because the podcast features guests who were previously incarcerated speaking to a currently incarcerated population. Each episode offers guidance for the incarcerated to change their thinking and set themselves on a positive path beginning their first day in a facility. This is an extension of Securus’ broader commitment to support the incarcerated as they build skills and resilience for a better future.

“The first thing people feel when they are incarcerated is hopelessness. Having been there myself, I understand the redemptive power of second chances and that time waits for no one, so the rehabilitative journey needs to start today,” said Norman, recalling his own 14-year journey in a correctional facility and the life he created for himself after his release. “This podcast is designed to inspire individuals across the country to take charge of their own rehabilitation, right now – not later, by hearing the stories of others who were behind bars but chose action over excuses.”

Beginning December 1, 2022, a new 45-minute episode will be released every Thursday over 12 weeks, which will add to the growing catalog of free education and reentry content provided through Securus. The podcast’s first guest is Jule Hall, an education advocate, speaker, and one of the spotlight characters on the Emmy-nominated Netflix documentary “College Behind Bars.” Hall is a fierce advocate of gaining an education while incarcerated and began that journey when he was just 17 years old. When Norman asked him what the first thing someone should do when they arrive at a correctional facility, Hall’s answer was to start reading.

“I really built my identity from day one in prison based on education. It was something I knew I was capable of that had slipped from me, and I knew it was something that would help me breathe,” Hall said, adding that reading was the key to that process. “I really allowed myself to go to a place of mental growth through books, which led my path to getting my education from one of the top 10 colleges in the nation.”

Additional guests featured on the “Day One with Andre Norman” episodes include:

“Our tablet platform has the power to bring voices of positive influencers into facilities on a massive scale to help inspire hope and belief in second chances – and that’s exactly what Andre’s latest podcast is doing,” said Dave Abel, President and CEO of Aventiv Technologies, the parent company of Securus. “We worked with Andre to create the “Day One with Andre Norman” series because we believe in the power of storytelling, which can enable transformative change for those in the incarcerated community. We hope the significance of making a change today – day one – resonates with people and will ultimately improve the outcomes for individuals after reentry.”

“Day One with Andre Norman” is Norman’s second podcast for Securus Originals™. His first, “Second Acts with Andre Norman,” debuted in 2021 and featured conversations with the formerly incarcerated and their advocates about fundamental life skills like rebuilding finances, restarting a career, reinvigorating the mind and body, and reintegrating with family.